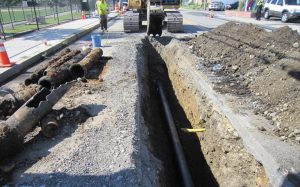 In November 2015, during the replacement of the water main along Tremont Street, an odor was noted emanating from the trench excavated to install a temporary water supply to the City of Melrose Department of Public Works (DPW) building.  A reportable release condition was subsequently found at the property and a former gasoline pump dispenser is the suspected source of the release.

Soil borings were drilled and soil samples were collected to delineate the extent of the release and to assess the source of the release, which is suspected to be a former gasoline dispenser that was removed in 1999.  Tata & Howard conducted a Method 1 Risk Characterization to evaluate the risk of harm to health, safety, public welfare, and the environment posed by the presence of residual gasoline contaminants in soil.  The results of the Method 1 Risk Characterization indicate that a condition of No Significant Risk exists for current and future foreseeable activities at the Site and an Activity and Use Limitation is not necessary to maintain a level of No Significant Risk.  Tata & Howard prepared a Permanent Solution with No Conditions Statement to document these findings and submitted the report to MassDEP.