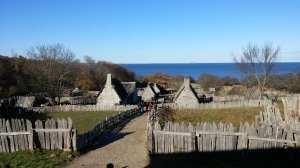 It’s Thanksgiving!  It’s that time of year when we cover our table with a feast of turkey, cranberries, and potatoes and imagine that we are celebrating as the earliest settlers had nearly four hundred years ago. But more likely, the Pilgrim and Wampanoag people enjoyed a plentiful bounty of waterfowl and fish at their feast – game and seafood attracted to the area by the clean, undisturbed waters of 17th-century Massachusetts.

Many historians believe that turkey and potatoes were not actually present at the first Thanksgiving. Turkey did not become the poster-bird for Thanksgiving until the early 1800s.  Back in 1621, the feast, which lasted three days, was comprised of foods that could easily be obtained in the region, and the local waters were an excellent resource for finding these.

According to one article, the birds that were most likely eaten were migratory ducks and geese attracted to the clean rivers, streams, and lakes of the Plymouth area.  Without these clean waters attracting birds to Massachusetts, the first Thanksgiving meal would have been much less impressive than it actually was. Below the surface of the rivers and streams, and the ocean of Massachusetts where this three-day feast took place, the Pilgrims and members of the Wampanoag tribe found many delicacies to add to their dinner table.  Clams, cod, lobsters, and eels were plentiful in the clean, undisturbed waters, and the early Americans took full advantage of this.

Additionally in an article from Smithsonian Magazine, there are reports that while there may have been beer at the table, there would have only been about a few gallons for 150 people over three days.  The rest of the group probably washed the meal down with water.  Another reason the guests at the first Thanksgiving were probably thankful for the clean waters available to them.

Water has certainly been a very important – if often overlooked- element of any Thanksgiving dinner.  While you’re boiling your potatoes, and getting the lumps out of the gravy, reflect on a feast such as this without water and give thanks by conserving water in your cooking.

May you and yours enjoy a happy and “water-ful” Thanksgiving!