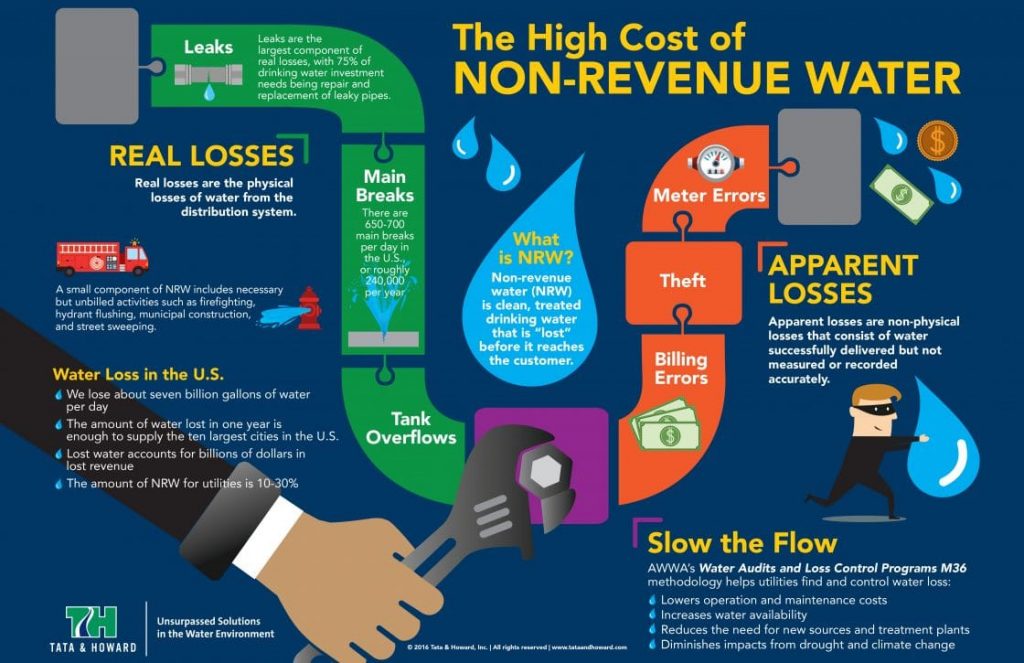 Fix a Leak Week is celebrated in the United States each March in order to remind people to check their homes for leaks, both indoors and out. Household leaks account for more than one trillion gallons of wasted water annually in the United States. To put it into perspective, that’s equal to the annual household water use of over 11 million homes. Fix a Leak Week encourages homeowners to repair their dripping faucets, leaky toilets, old showerheads, and faulty irrigation systems in an effort to save our nation’s water. But that’s only part of the problem.

10-30% of our nation’s clean, treated drinking water is “lost” before it ever even reaches the consumer. In fact, about seven billion gallons of water are lost in this way every single day. Lost water, also called non-revenue water, accounts for billions of dollars in lost revenue each year. Most of this non-revenue water is the result of our nation’s leaking, aging pipes, which received a grade of D+ on the American Society for Civil Engineers (ASCE) 2013 Report Card.

So while fixing the leaks in our homes is certainly valuable, fixing the leaks in our nation’s pipes is critical to a sustainable future. Not only will repairing our nation’s crumbling underground infrastructure save money, but it will also increase water availability, lowering operation and maintenance costs, reducing the need for new sources and treatment plants, and diminishing impacts from drought and climate change. Unfortunately, repairing and replacing pipes is costly. Therefore, utilities need to accurately pinpoint the most problematic areas in the distribution system so they can invest their limited infrastructure dollars where they are needed most. Water audits, which take into account both real and apparent losses, are the most efficient, cost-effective way to accurately assess non-revenue water.

Feel free to share the infographic below, with attribution, download a printable PDF, or request a printed poster. During Fix a Leak Week, let’s not only repair our faulty flappers, but also our nation’s leaking underground pipes. The future depends on it.