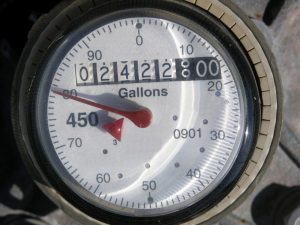 A water audit was conducted according to the guidelines outlined by the American Water Works Association (AWWA) in Water Audits and Loss Control Programs, Manual of Water Supply Practices – M36, Third Edition. The data reviewed and analyzed included the volume pumped for each source, source meter errors/calibration, the volume of water imported/exported, billed and unbilled consumption, recorded leakage, main breaks, and unauthorized consumption. Key performance indicators, including Infrastructure Leakage Index (ILI) and non-revenue water, were evaluated to track management of the water utility.  Based on the results of the audit, recommendations were made to improve system operation and reduce non-revenue water.  Although the RWA’s non-revenue water water rate was around 15%, the audit confirmed that the RWA’s Infrastructure Leakage Index or ILI was at industry best practice levels, confirming that apparent losses made up the majority of RWA’s water loss.

The recommendations in the audit report included verification of flows at ten production meters, where serious over-reporting of flow was identified.  As a result of this work, two of the production meters were replaced in 2013, including a 54-inch diameter venturi tube at the RWA’s main source.  The audit report also confirmed statistical analysis of customer meter testing that led to a decision to focus meter replacement work on piston-type meters while leaving older but more statistically accurate nutating disc-type meters in service for longer periods.