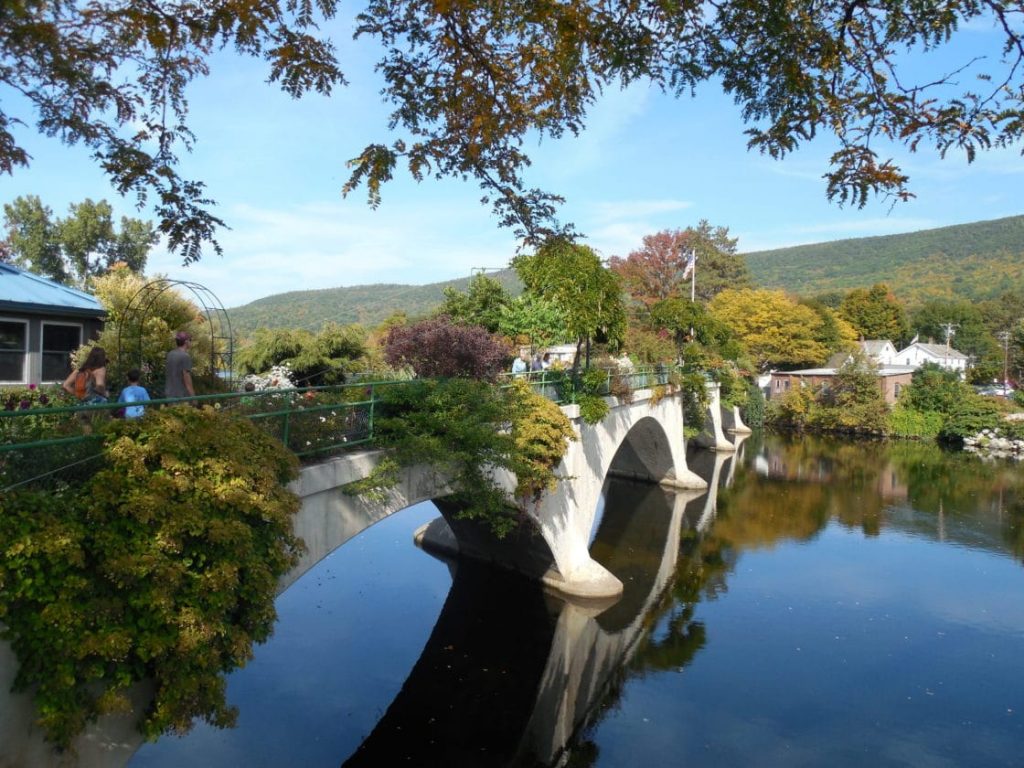 Built in 1908 by the Shelburne Falls and Colrain Street Railway to transport people and freight to the mills in Colrain, the bridge was already out of use by 1927 when the railway company went bankrupt. However, even though it was no longer being utilized for any type of traffic, the bridge could not be demolished because it carried a water main between the towns of Buckland and Shelburne Falls. After seeing the bridge blanketed in weeds, a woman named Antoinette Burnham was inspired to turn the bridge into a lovely garden, and the community fully supported her whimsical idea. The Shelburne Woman’s Club and other women’s clubs in the town financed the project.

In 1981, the Women’s Club spearheaded a fundraising campaign for bridge repairs and the Club, along with the Towns of Buckland and Shelburne, bridge owner Shelburne Falls Fire District, the Shelburne Falls Area Business Association, and the Franklin County Planning Department, worked together to hire a planner for the project. The engineering study estimated the cost of repairs and restoration to be $580,000, which was raised through fundraising, a Massachusetts Small Cities Community Development Block Grant of $290,000, and appropriation of $100,000 from the Shelburne Falls Fire District. During restoration in 1983, the water main was replaced, and every single plant, tree, and shrub was carefully removed and tended by private citizens.

Today, care of the living bridge is managed by a head gardener, her assistant, and countless local volunteers. The blooming bridge boasts over 500 varieties of annuals and perennials and is open to the public from early spring through late fall.

Connecting the towns of Haddam and East Haddam, Connecticut via Route 82 over the Connecticut River, the East Haddam Swing Bridge is believed to be the longest swing bridge of its kind in the world. The 881-foot long steel-truss swing, or opening, bridge is constructed of two separate spans that swing open on every half and full hour to allow recreational water vehicles to pass. Officially opened on June 14, 1903, the East Haddam Swing Bridge celebrated its centennial celebration on June 15, 2013 with an antique car parade. 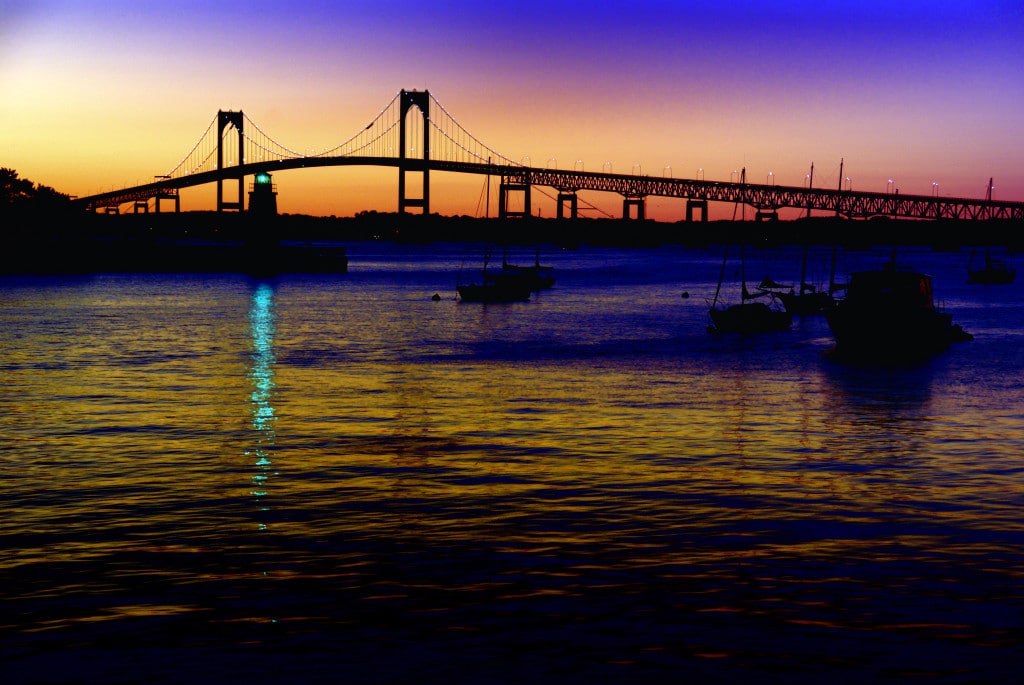 Constructed to connect the popular summer tourist town of Newport to Jamestown, RI, the Claiborne Pell Bridge is the largest suspension bridge in New England. Its main span is almost 500 meters, total length is about 3,500 meters, and its main towers stretch over the Narragansett Bay at 120 meters. Originally named the Newport Bridge, the bridge was renamed the Claiborne Pell Bridge in 1992 in honor of United States Senator Claiborne de Borda Pell, who was the longest serving senator from Rhode Island and the force behind the 1973 Pell Grants, which provide financial aid to college students. Built in 1927, this unique bridge connecting Bailey Island and Orr’s Island in Maine is constructed of granite blocks stacked atop one another with no mortar — the bridge is entirely held together by gravity. Bailey Island Bridge is, in fact, the only cribstone bridge in the world. Its unique construction lends the bridge incredible strength, allowing it to withstand the fiercest storms with minimal maintenance throughout the years, while still allowing strong currents and tides to easily flow through it. Added to the National Register of Historic Places in 1975, Bailey Island Bridge is a must visit for any local bridge enthusiasts. While there are many quaint, picturesque covered bridges throughout New England, Gold Brook Bridge is unique among them. Constructed in 1844, the 50-foot long single-lane structure, dark and weathered, is purported to be the home of a less-than-friendly ghost named Emily. There are two tales about Emily, and neither has been confirmed. In one version, the beautiful young woman and her lover made plans to meet at the bridge and elope. When the young man never showed, Emily was so overcome with grief that she tied a length of rope to the bridge rafters and hanged herself. In the other version, Emily and her fiancé planned to marry in the town church. Donning a red dress, Emily waited at the church in vain, as her betrothed never showed. Distraught and angered, Emily fled the church in the family wagon, whipping the horses into a frenzy. As she approached the bridge, she failed to negotiate the turn, sending wagon, horses, and jilted bride into the brook, killing all.

To this day, many local residents swear by Emily’s ghostly existence. There have been many reports of scratches and handprints appearing on vehicles that traverse the bridge at night, and people who are brave enough to venture into the structure on foot have heard screams, laughter, swinging rope, footsteps, and have experienced many technological failures. Cameras turn off, some photos come out blank, and mysterious orbs and images appear in other photos. Females who enter the bridge have felt burning scratches on their arms and backs, and many have seen Emily’s apparition calling for help. Officially opened in 1850, the Contoocook Covered Railroad Bridge is the oldest of eight surviving covered railroad bridges and four surviving double-web town lattice railroad bridges in the country. The bridge survived a flood in 1936, a hurricane in 1938, and has undergone many repairs and renovations; however, it is still considered to be the most original structure of its type, as the few others remaining have all undergone major structural modifications. It was added to the National Register of Historic Places in 1980. Nestled in a rural setting in central Maine, the New Portland Wire Bridge is believed to be the only remaining wire (suspension) bridge in the nation. Constructed around 1864 to span the Carrabasset River, it has a single lane constructed of wooden planks, original shingle-covered towers and 4-inch steel cables anchored by 30-ton concrete and granite blocks, and a weight limit of three tons. The bridge, last rehabilitated in 2010, is decorated with lights around the holidays and is a popular place to take photos. It was added to the National Register of Historic Places in 1970. Tucked away in western Massachusetts stand the first keystone arch railroad bridges built in the nation. With heights up to 70 feet, these amazing structures were completely dry laid in the mid-1800s and designed to carry locomotives of that time, which weighed about 12,000 pounds. Incredibly enough, some of the arches are still in use today but carry locomotives that are about 430,000 pounds – or 35 times heavier than their predecessors. In 1912, parts of the railroad line were relocated, and the bridges that were bypassed have stood in place with absolutely no maintenance since that time. Accessible only by hiking trails, these magnificent arches make an enjoyable daytrip for nature enthusiasts and families. Designed to combine Boston’s historic past with its future, The Leonard P. Zakim Bunker Hill Bridge was named in honor of civil rights activist Lenny Zakim. With its inverted Y-shaped towers that reflect the shape of the Bunker Hill Monument in neighboring Charlestown and its cables that are reminiscent of a ship in full sail, the bridge memorializes Boston’s colonial and shipbuilding history while maintaining a modern, sleek appearance. At 183 feet wide and 1,432 feet long, it is the widest cable-stayed bridge in the world and carries ten lanes of traffic in and out of the bustling city.

Admittedly, Thread City Crossing over the Willimantic River in Connecticut is quite unremarkable — save for the four 11-foot tall frogs perched atop massive spools of thread. Affectionately known as The Frog Bridge, the 500-foot structure was built in 2000 and shows that the good folk of Willimantic certainly have a sense of humor. While the spools of thread were incorporated into the design in order to commemorate the Town’s history as a leading thread manufacturer of the 19th and 20th centuries, the frogs were included for a much cheekier reason. In 1754, the townsfolk of Windham, CT (now Willimantic) were apprehensive and jittery. You see, Windham’s finest had joined Colonel Eliphalet Dyer’s regiment to fight in the French and Indian War, and those left behind were terrified. People slept lightly, with muskets tucked next to their beds, in anticipation of an imminent Indian attack. One very hot summer night, with the Town in the midst of a dreadful drought, the townsfolk were roused by an unearthly sound, described as “a shrieking, clattering thunderous roar.” Some believed the dreaded Indian attack had finally come, while others believed that Judgment Day was upon them. The townspeople ran into the streets, some falling to their knees to pray while others blindly shot their muskets into the night. A group of braver souls went off in search of the marauders, to no avail.

When the sun rose the next morning, the villagers were finally able to see what had caused the “terrifying” commotion. A millpond, two miles east of the village center, had almost completely dried up during the summer drought, and apparently the local bullfrog community had engaged in a turf war to claim ownership of the dwindling water supply. Hundreds of bullfrog carcasses riddled the perimeter of the pond, and, from that day forward, the Town became infamously — and, to the townsfolk, embarrassingly — known as the scene of the “Battle of the Frogs.”

Do you know of any bridges in New England that we should have included on our list? Let us know! We’d love to hear from you.