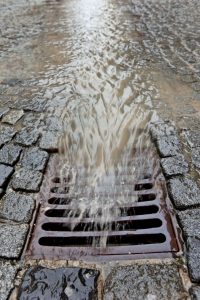 What’s the big deal about stormwater? After all, it’s just rain, right? Not really. Rain or snow that lands on pervious, or porous, surfaces such as forests, gardens, or fields soaks into the ground and is naturally filtered and cleaned by layers of dirt and rocks, after which it finds its way to groundwater and drinking water supplies. Stormwater is precipitation that runs off impervious surfaces, such as rooftops, paved areas, lawns, and bare soil, directly into lakes and streams. Because it does not infiltrate and is therefore not filtered prior to entering ground or surface waters, stormwater is contaminated by everything it picks up along the way. These pollutants include but are not limited to pesticides, motor oil, gasoline, antifreeze, road salt, trash, fertilizers, sewage, bacteria, and pet waste, and they wreak havoc on drinking water supplies.

Common problems associated with waters polluted by stormwater include bacterial and nitrogen overload, low-oxygen dead zones, toxic algae blooms, litter-strewn waterways, damage to coastal marshes, and beach closures. In addition, pollutants carried by stormwater can harm or kill fish and wildlife, destroy vegetation and wildlife habitats, and foul drinking water. And all of these problems come with a very high environmental and monetary price tag. The most cost-effective way to manage stormwater pollution is to prevent it in the first place, which requires the cooperation of the government, municipalities, and individuals.

How the Government Helps

The United States Environmental Protection Agency (EPA) has instituted stormwater regulations under its Clean Water Act, which aims to protect our nation’s water so that it is clean, drinkable, fishable, swimmable, and healthy. The National Pollutant Discharge Elimination System (NPDES) Permit Program controls water pollution by regulating point sources that discharge pollutants into waters of the United States. Three specific contaminants of concern are bacteria, phosphorus, and nitrogen, and many of our nation’s rivers, streams, and lakes are already widely contaminated by these pollutants.

Increasingly, municipalities are addressing the issue of stormwater through regional collaboratives, education, legislation, and taxation. Last January, the Portland, Maine City Council unanimously voted to charge property owners a stormwater fee, which is dependent on the size of their rooftops and driveways or parking lots. The fee goes into effect this coming January and will cost the average homeowner roughly $4.50 per month, but will have a much larger impact on businesses like L.L.Bean, which will incur a monthly fee of just under $10,000. Several other municipalities in New England have implemented similar fees, including Chicopee, Fall River, Northampton, Newton, and Reading, MA, and Burlington, VT. Across the nation, over 500 municipalities, including major cities such as Minneapolis, Baltimore, Charlotte, Des Moines, Philadelphia, Seattle, Salt Lake City, and Orlando, have also begun imposing stormwater fees. While many residents and businesses have complained about this alleged “rain tax,” the fees actually assist with the remediation and cleanup necessary due to stormwater pollution, which is exacerbated by impervious cover. It is possible for homeowners and businesses to reduce stormwater fees by reducing the square footage of their property’s impervious surfaces.

Regional collaboratives, aiming to comply with the NPDES Permit Program, are becoming increasingly common with MS4 permittees. These collaboratives, such as the Central Massachusetts Regional Stormwater Coalition (CMRSWC) in south-central Massachusetts, hold workshops together with stormwater engineering consultants in an effort to determine the most essential tasks for stormwater management as well as the critical content of each task. With this method, these municipalities are able to pool resources to identify and implement the most efficient, cost-effective methods of meeting MS4 Permit compliance within their communities.

How Individuals Can Help

Mitigating stormwater pollution requires a multi-faceted best practice approach that involves not only federal and local agencies and municipalities, but also homeowners and individuals. There are many ways for individuals to reduce stormwater pollution including cleaning up and properly disposing of pet waste in a timely fashion, maintaining healthy septic systems, reducing or eliminating the use of pesticides and fertilizers, and implementing cleaner automotive operations. In addition, homeowners may implement Low Impact Development (LID) practices on their property to manage stormwater and to save water. Some of the easiest and most cost-effective LID practices include installing rain barrels, rain gardens, green roofs, and permeable pavers. Comprehensive information on LID may be found here, and of course, public education is key. Some other important ways that individuals can mitigate stormwater pollution are as follows:

Because the monetary and environmental cost of damage caused by stormwater is so exorbitant, it is imperative that communities take action to proactively prevent stormwater runoff before it causes damage. The old adage about an ounce of prevention being worth a pound of cure is quite applicable in the case of stormwater, as methods for stormwater prevention are both inexpensive and simple to implement, whereas cleanup and treatment are costly. However, best stormwater management practices require cooperative involvement of governments, municipalities, businesses, and residents. In other words, it really does take a village to manage stormwater.

On May 27, 2015, the EPA announced that the new Multi-Sector General Permit (MSGP), originally proposed in 2013 and referred to as the 2015 MSGP, will be available soon for operators seeking permit coverage to discharge stormwater associated with industrial activity. Filing to renew coverage under the 2015 MSGP must be done electronically using EPA’s new NPDES eReporting Tool (NeT), and, once covered by the new permit, all monitoring data will be submitted electronically using NetDMR.

To prepare for the new 2015 MSGP, EPA recommends taking the following steps: