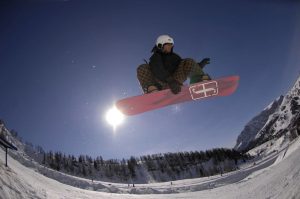 The Winter Olympic Games are in full swing, and snowboarding has quickly become one of the most popular events. But did you know that the snowboard was invented by an engineer? In 1965, Sherman Poppen, a chemical gases engineer in Muskegon, Michigan, invented “The Snurfer” (affectionately named by his wife as a cross between snow and surfer) as a toy for his daughter. He created the Snurfer by binding two skis together side by side and attaching a rope at the nose onto which the rider could hold for added stability. The Snurfer was a big hit with Poppen’s daughter and her friends, and so Poppen licensed his snow-covered groundbreaking idea to a manufacturer. Half a million Snurfers sold the following year, and a new sport was born. Snowboarding was added to the Olympic Games in 1998.