Boston, Massachusetts became home to the nation’s first waterworks in 1652. Distribution pipes at that time were made of wood, constructed from bored-out logs from the area’s plentiful hemlock and elm trees and attached together with pitch, tar, or iron hoops. While this rudimentary distribution system did supply some of the area’s residents, it was mainly used for fire protection as homes during that time — constructed of wood and heated with fireplaces —were particularly prone to fire. 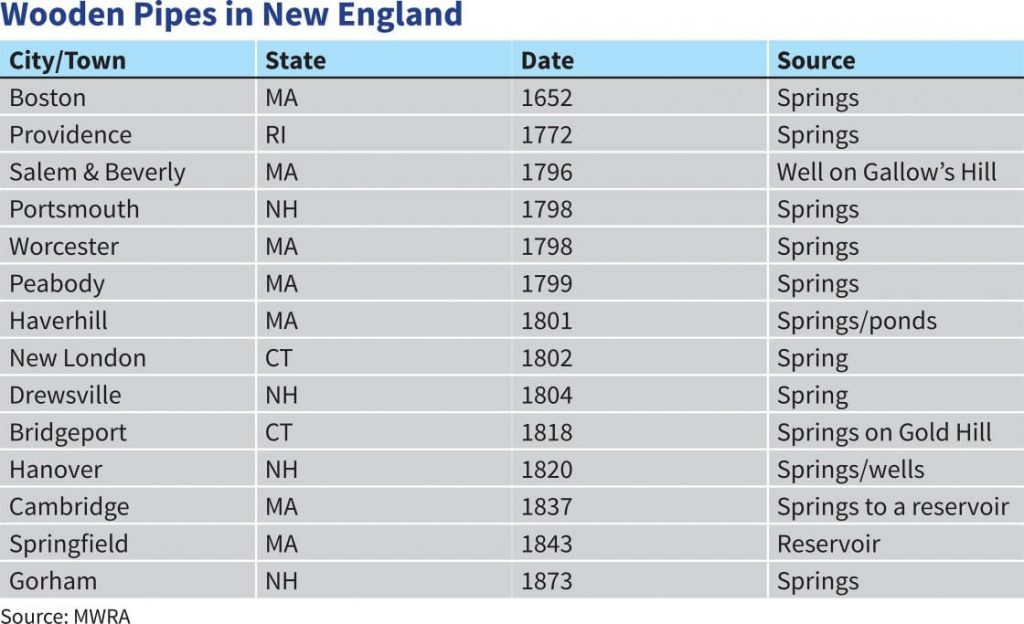 It was over a century before other New England cities began installing wooden distribution pipes. Providence, Rhode Island, Portsmouth, New Hampshire, and Worcester, Massachusetts all laid wooden pipes during the late 1700s, and several other cities followed suit in the early 1800s. Contrary to some urban myths, wooden pipes are not still in use in any areas of New England today. The high pressure from modern water systems would instantly split any existing wooden pipes. Wooden pipes that are occasionally unearthed during some construction projects were disconnected years ago. 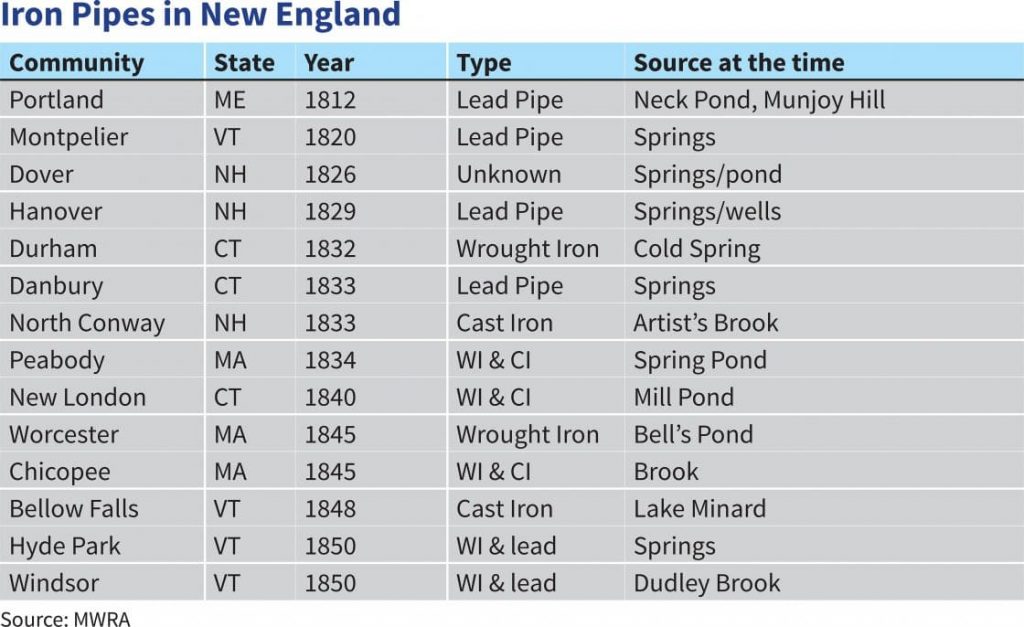 Wooden pipes were problematic for many reasons including warping and sagging, insect infestation, rotting, taste issues, and splitting. As iron became increasingly available during the early 1800s, cities began installing iron pipes. The first iron pipes in New England were installed in Portland, Maine in 1812, followed by Montpelier, Vermont in 1820, and in both instances the pipes were lead. Many other cities followed suit throughout the 19th century, utilizing wrought iron, cast iron, and lead pipe. In the 1950s, ductile iron piping was introduced and boasted the longevity of cast iron with the addition of increased strength, flexibility, and safety. It became widely used in the 1970s and it is still the material of choice throughout New England today.

New England can be considered a pioneer of our nation’s water infrastructure. After all, distribution systems have grown from a few wooden pipes in Boston to the intricate, complicated underground infrastructure that we enjoy today. However, because much of the area’s infrastructure was laid so long ago, it has reached the end of its useful life. Water main breaks occur daily and are not only inconvenient to customers, they can also be dangerous, as evidenced by the November 2016 water main break in Boston, Massachusetts that caused manhole fires and forced evacuation of the area. Maintaining and updating our distribution systems is critical to the health and safety of our nation, its people, and the economy. But with limited budgets and resources, where do we start?

Strategically prioritizing improvements is imperative to today’s water systems, as the rehabilitation and replacement of our nation’s buried infrastructure is an ongoing task. Asset management provides a roadmap for utilities, allowing them to maximize their limited infrastructure dollars by planning for the replacement of critical infrastructure over time. Tata & Howard’s Capital Efficiency Plan™ (CEP) methodology takes it one step further by combining the concepts of asset management, hydraulic modeling, and system criticality into a single comprehensive report. The final report provides utilities with a database and Geographic Information System (GIS) representation for each pipe segment within their underground piping system, prioritizes water distribution system piping improvements, and provides estimated costs for water main replacement and rehabilitation.

Since the firm’s inception in 1992, Tata & Howard has remained a niche firm with deep experience and expertise in the water environment, and has provided CEP and hydraulic modeling services for countless municipalities throughout New England. Tata & Howard has one of the largest pipe asset management databases of any consulting engineering firm in New England. In fact, we have data on over 5,000 miles of New England pipe, providing utilities with critical information about their systems such as condition and probability of failure of certain pipe cohorts.

Water distribution systems have come a long way since the days of hollowed out logs providing fire protection to colonial Bostonians. The underground network of distribution pipes has grown astronomically and now incorporates safer, stronger, and more cost-effective materials. As distribution systems are updated and expanded, it is critical that accurate, up-to-date information is available to water systems so that they may invest their limited capital wisely.