Water is the common denominator for every living thing on earth. Without it, we simply cannot survive.

But even though this resource is so critical, 785 million people around the world lack access to safe water. According to a report by the World Economic Forum, the water crisis is the #4 global risk in terms of impact to society. 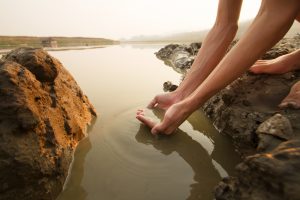 The Effects of Water Pollution During the Summer

On a warm summer day, nothing feels quite as nice as a refreshing dip in the water. Until the water is contaminated, that is. In the past year, nearly 60 percent of the 4,500 tested beaches across the country had water pollution levels (on at least one occasion) that put swimmers at risk of getting sick. Well over 2,000 beaches surpassed the EPA’s margin of safety. Polluted waters can lead to a variety of stomach and respiratory illnesses in swimmers, and ultimately cause an estimated 57 million cases of waterborne illnesses every year.

According to the EPA’s most recent Water Quality Assessment data, fecal matter from sewage overflows and stormwater runoff in highly settled areas are the two of the largest causes of waterway contamination.

Stormwater flowing over both suburban and urban areas pick up fecal matter from pets and wildlife along the way. This waste carries bacteria which leads to illnesses. The Centers for Disease Control and Prevention (CDC) reported that from 2000 to 2014, 140 outbreaks caused by recreational water contamination caused nearly 5,000 illnesses and two deaths. Consuming seafood harvested from contaminated waters can also cause an equally harmful health threat. In addition, studies in California show that swimmers directly in the flow of storm drains are 50% more likely to develop an illness than those who are just 400 more yards away from the same drainage flow.

The EPA estimated that 850 billion gallons of untreated water were released into waterways as a result of sewage overflows. Sewage contamination contains human waste comprised of bacteria, viruses, and parasites capable of causing diseases.

The Effects of Fecal Contamination

Tested sites were unsafe if bacteria levels exceeded the EPA’s ‘Beach Action Value.’ These levels were reached in every region of the country.

Keeping our waterways clean, especially during the summer months, is critical. Luckily, we can all help reduce the number of contaminants reaching our favorite beaches and swimming holes.

Here are some helpful tips to stay safe at the beach this summer by preventing water pollution:

Will you be able to put these into effect in efforts to stop stormwater pollution? What else are you doing to keep our waterways clean?