Saugatuck Dam is a concrete water supply dam in Weston, CT built in 1940, now owned by Aquarion Water Company. The majority of this project included repairs and modification to the gatehouse and gate chambers at the dam. Repairs included rebuilding the gatehouse walls, cleaning and painting the intake and outlet valves, and removing and replacing the stems and valve operators. Modifications included installing platforms made of steel beams and fiberglass in the gate chambers to provide safer access the valves in the chambers, and the interconnection of the 36” supply main and the 48” diversion main at the toe of the dam to provide greater flexibility for releasing water from the reservoir. 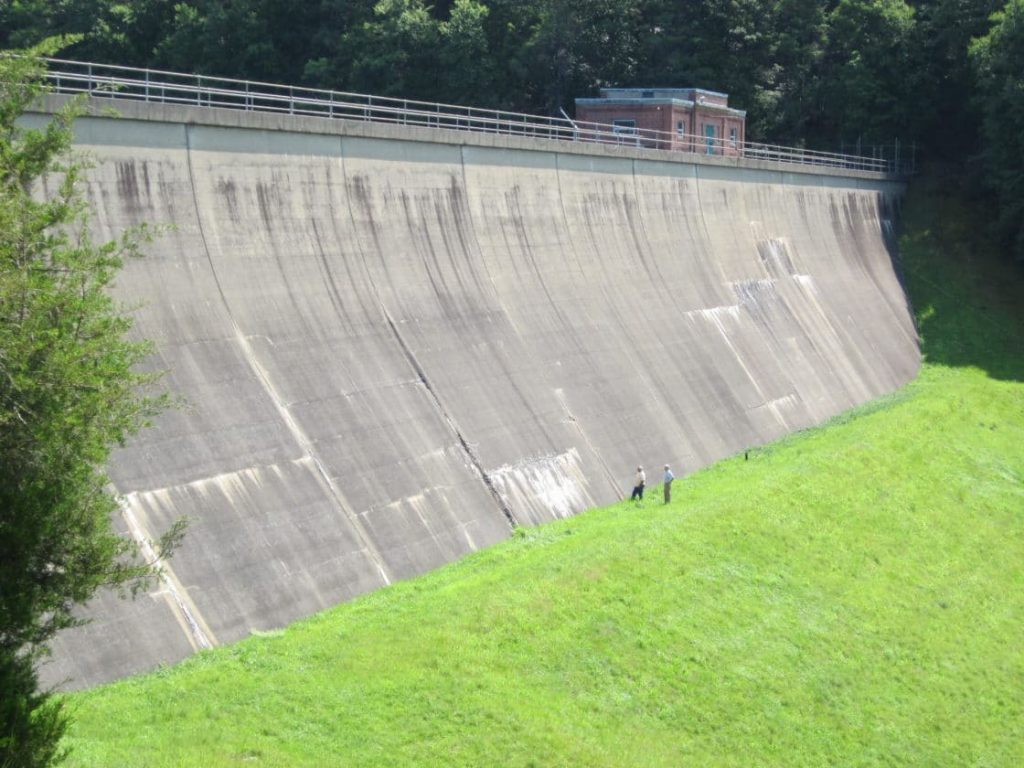 THE CHALLENGE: The existing spillway is inadequate to discharge the 100-year spillway design flood, and the existing, aging dam is in very poor condition. The embankments are steep and lack erosion protection, the crest is narrow, and the outlet is in disrepair and inoperable. The reconstruction of Fosters Pond Dam needs to be designed to improve the safety and reliability of the structure, provide an operable outlet, and make the structure easier to maintain. erosion protection, constructing a new reinforced concrete gate structure with 24-inch inlet and outlet pipes and sluice gate, widening the embankment crests to 12 feet, flattening the slopes for ease of maintenance, and providing a gravel road to allow access to the left (looking downstream) embankment and gate structure. Riprap erosion protection will be provided on the upstream slopes and in the discharge channel. With these improvements, the dam will be able to safely pass the 100-year spillway design flood with 1.1 feet of freeboard. The level and length of the spillway weir will remain unchanged.

THE CHALLENGE: The Means Brook Reservoir Dam, a concrete gravity dam constructed on rock in 1916, required repairs in order to improve the safety and reliability of the structure, replacement of the deteriorated upstream and downstream faces of the dam and the crest, and rehabilitation and modernization of the gate chambers. Hydraulic, hydrologic and structural studies over the last several years have shown that the dam would be overtopped by about 3.9 feet by the Probable Maximum Flood (PMF), and that the dam does not have adequate stability factors of safety for this extreme loading condition. The upstream and downstream faces and the crest of the dam were severely spalled and delaminated, and the dam reportedly overtopped by about four inches during the 1955 flood. In 1977, the spillway was extended to its current length of 100 feet and a 2.1-foot high concrete parapet wall was constructed along the upstream crest of the dam.

THE SOLUTION: Concrete repairs were made to the crest and both faces of the dam. The deteriorated and delaminated shotcrete and concrete were removed to sound concrete, anchor dowels and reinforcing installed, and new concrete surfaces poured. The upstream face was resurfaced to a depth of about six feet below spillway, and the downstream face to two feet below grade. Depth of concrete removal was between three and six inches. The new concrete surface was designed with a nominal thickness of 12 inches on the downstream face and six inches on the upstream face.

Rock anchors were installed and post-tensioned in holes drilled through the dam into the rock foundation. The anchors will improve the stability of the dam and provide adequate factors of safety for overtopping by the PMF.

The repairs and improvements undertaken to the gatehouse and chambers included reshingling the gatehouse roof, providing a new steel plate exterior door for additional security, and blocking up the existing windows. The antiquated electrical system was replaced. Both of the inoperable sluice gates and their appurtenances in the upstream gate chamber were replaced. The former vertical brass ladders in the intake gate chambers were replaced with new fiberglass ladders. A base for a fall protection and retrieval system was installed.

Wooden stairs in the lower gatehouse were replaced with a new aluminum ships ladder. The pneumatically operated butterfly valve on the 30-inch service main in the basement of the lower gatehouse was replaced with an electrically operated butterfly valve that can be remotely controlled. An extension stem and electric operator were provided. The operator was installed in the operating room above the valve, not in the basement. The 8-inch chamber drain and 10-inch auxiliary outlet gate valves were also replaced. Floor openings within the gatehouse previously covered with wooden hatches were replaced with aluminum grating with cover plates.

PROGRESS: The project was completed in August of 2015. Tata & Howard provided engineering services to the University of Southern Maine related to the interior and exterior rehabilitation of a welded steel water storage tank. The standpipe was constructed in the 1950’s and is approximately 30 feet in diameter and 105 feet tall with a capacity of 0.55 million gallons. The scope of services included preparing Contract Documents for the cleaning, interior abrasive blasting, exterior pressure washing, and interior and exterior coating application. The project also included coordination with two cellular companies and incorporation of corresponding design considerations into the Contract Documents. Additional design considerations included providing the USM logo on the tank exterior, repairing foundation cracks and gaps, extending the overflow pipe and installing a flapper, screen, and concrete splash pad, providing safety climb system for exterior access ladder, replacing the roof vent, and installing a new roof access hatch. Tata & Howard provided bid assistance, construction administration services, and full time construction observation. Since the standpipe is located on a college campus, the time frame for completion was limited to summer break, but the standpipe rehabilitation project was completed within budget and on schedule. 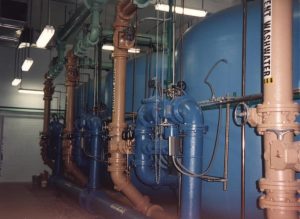 Tata & Howard has been working with the Town of Hopedale, Massachusetts for a number of years on a variety of wastewater collection and treatment projects.  When the Town received an administrative order to address copper and ammonia violations at the plant, they turned to Tata & Howard for assistance. We completed the design and construction of a Wastewater Treatment Facility Upgrade project which included the installation of an automated soda ash feed system and an integrated fixed film activated sludge system (IFAS). The IFAS system is an innovative biological treatment process using thousands of special carriers designed to increase total surface area for biofilm growth without expanding the plant’s footprint.  The blowers were also modified to provide better control over the aeration process.

A pilot study was conducted to test the ability of various reagents to facilitate the removal of copper from the waste stream.  An automated chemical addition system was designed to improve coagulation.  Additionally, a dynamic tangential filter was incorporated into the upgrade project.  These improvements have allowed the Town to now meet its discharge limits for ammonia and copper.